Researchers in B.C. are working on developing a breath test for COVID-19 that if successful, could provide results in less than one minute.

The test could theoretically be rolled out in the community — at airports, schools, arenas and other venues, said Dr. Renelle Myers, an interventional respirologist at Vancouver General Hospital and B.C. Cancer Research Centre who is leading the team at Vancouver Coastal Health developing the test.

“Our goal is to get society back where it needs to be and bring people together again but safely and confidently with accurate, quick tests,” said Myers.

The researchers are working to identify the specific volatile organic compounds in breath that could indicate whether the coronavirus is present, said Myers.

Once they identify them, they’ll be able to test for only those compounds by running breath samples through a machine similar to the ones used at airports to scan for bomb or drug residue and have results within 30 seconds to a minute, she said.

“When you exhale, your breath actually contains over 1,000 volatile organic compounds, and those represent the end points of different metabolic pathways in our body,” explained Myers. “And they can represent a state of health or state of disease.”

Before the pandemic, the researchers were working on early diagnosis of lung cancer through breath.

In May 2020, they switched gears and are now focused on developing a test to identify COVID-19 in “minimally symptomatic” patients, said Myers.

So far, they’ve tested 300 people and intend to collect a few hundred more samples that they hope will help them zero in on the right compounds, she said.

To gather the samples, the researchers visit COVID-19 testing sites and ask patients who are having a nasal swab or gargle test if they’d be willing to take part in the research. Most say yes, said Myers.

Participants provide two separate breath samples — blowing into a syringe for one and into a sealed bag for the other.

They compare the results against negative and positive COVID-19 test results to see what similarities or differences they can find.

Many steps still to go

The researchers are still a long ways out from rolling the breath test out at arenas and concert venues.

“It’s challenging. A number of steps would have to fall into place before it can hit prime time,” said Dr. Chris Carlsten, division head of respiratory medicine at the University of British Columbia in Vancouver, where Myers is also a clinical professor.

Carlsten says the researchers will need to validate their results to ensure they get an accurate reading each time; that the tests are picking up coronavirus and not other respiratory viruses, such as influenza; and that they have the ability to detect even the mildest of cases.

In the lab, the team is using a powerful, sophisticated GC-MS machine to detect and identify specific compounds, but those machines are expensive and for the test to have wide-reaching application, the equipment needs to be portable and affordable, Carlsten said.

Currently, even the smaller, mobile units the researchers are using cost $150,000.

“The machines are super expensive. That is an issue,” Carlsten said. “But again, I think, you know, if it works, then there will be competition to get the cost down, as there is with most anything.” 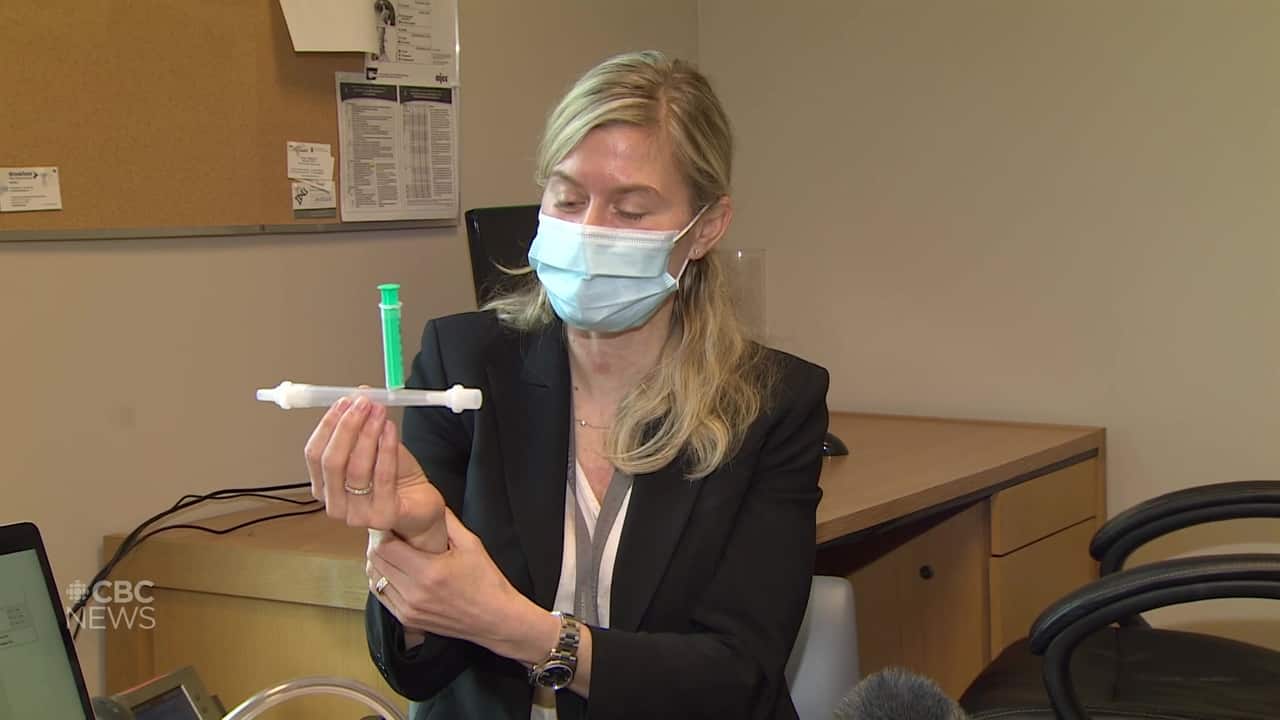 Dr. Renelle Myers shows how breath samples are gathered from patients and run through a mobile machine 0:46

Given the need for a more rapid, convenient and mobile way to test for coronavirus, Carlsten said, the researchers have a few things in their favour.

“A year or two ago, if you had said this could actually be used in real space in six months, I would say that just doesn’t feel very realistic,” he said.

“Now, it maybe could because of the way that things have accelerated, and they use a similar technology at the airport already for narcotics etc. that took years to develop. But with the pressure that we have here, it’s possible.”

David Evans, a professor in the department of medical microbiology and immunology at the University of Alberta in Edmonton, says the researchers are using sound science to detect the compounds and if they’re successful, the technology could be valuable but that “there is a big hill to climb before it becomes a widely adopted method.”

Evans points out that the standards of evidence regulators such as Health Canada require before approving such products are high.

“What the general public and news media don’t often understand are how challenging and time consuming it is to generate the data you need to convince regulator to allow these on a population,” he said.

Myers said she is not aware of similar research being done in Canada, but internationally, there are several groups, including in the U.K., Singapore and India, that are doing similar work. Her team is collaborating with British researchers to verify results and share findings.

Myers didn’t say when she expects her team to validate the research, but she said once it does, things could move quickly.

“It’s been fast paced,” she said. She said it would be “really exciting, if we can be a part of fixing, helping [in] this pandemic … if we can get people back together.”