With COVID-19 cases continuing to break records, Alberta added 20 additional intensive-care beds in Edmonton over the past week and 10 more in Calgary.

On a day when the province saw its highest number of new cases yet with 1,733, Alberta Health Services said plans are in the works to more than double the number of ICU spaces.

“There is no doubt that the hospital system is under significant strain,” Dr. David Zygun, medical director for the Edmonton zone, said at a news conference on Monday.

“Having said that, we have planned extensively for it, and we are executing those plans as the demand increases.”

AHS is maximizing space by cohorting patients and by using decommissioned spaces, Zygun said, and is looking at transferring patients from acute-care beds to other primary care or continuing-care facilities to free up hospital beds.

The province normally has 173 general adult ICU beds but is preparing for increased demand over the coming days and weeks, with plans to expand the number of ICU beds to 425, he said.

Across the province, hospitals were treating 453 patients for the illness, including 96 in ICU beds. Both of those totals also set new records.

WATCH | Alberta’s top doctor says COVID-19 vaccines will not be made mandatory: 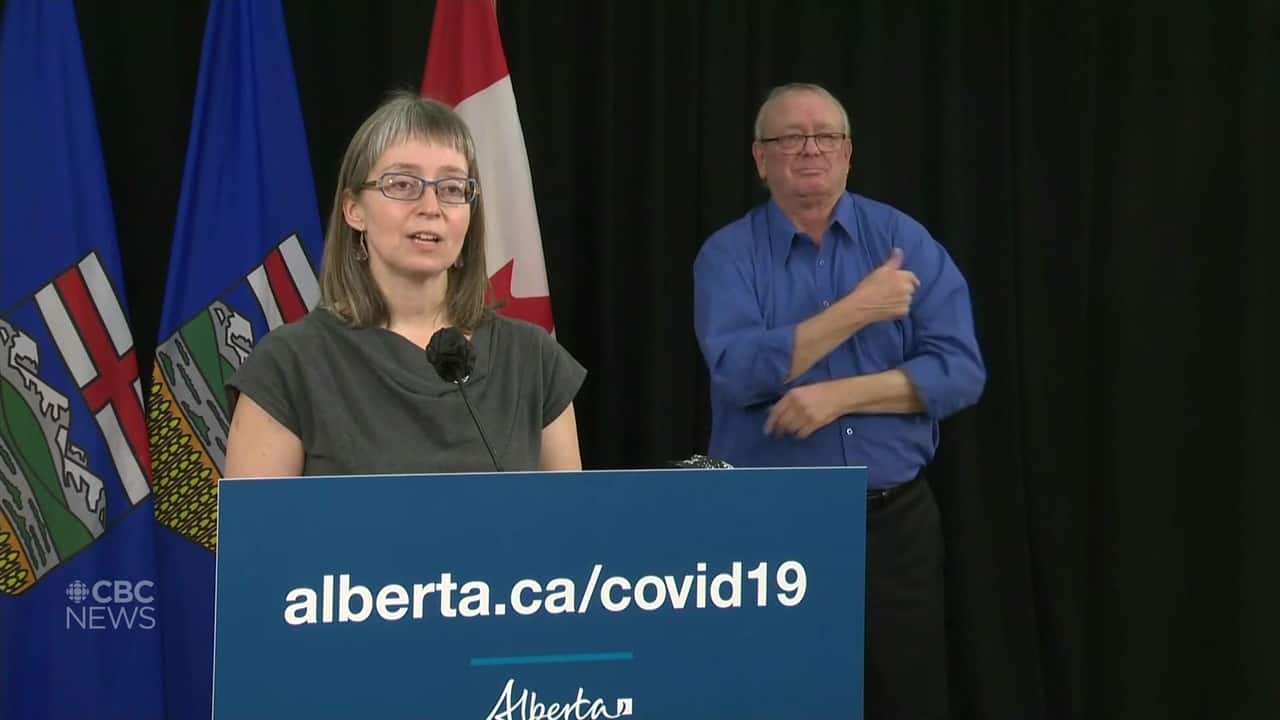 Asked Monday whether Alberta would make a COVID-19 vaccine mandatory, Dr. Deena Hinshaw said it is not the place of the government to force people to get vaccinated. Rather, the province will rely on education and encouragement. 1:20

Another eight deaths were reported on Monday, bringing the total to 541.

“Like all Albertans, I am alarmed by the rising case numbers reported today and over the weekend,” Dr. Deena Hinshaw, the province’s chief medical officer of health, said at Monday’s news conference.

“This is another reminder that COVID-19 has a long incubation period, meaning the actions we take today will not be seen until 10 to 14 days from now.”

At the peak of the average influenza season, Alberta typically has about 30 patients in ICU with influenza, she said, and COVID-19 patients are already at triple that number.

“And if we have continued spread, we are nowhere near that COVID-19 peak unless we can bring our numbers down.”

Long-term care centres have been hit hard in Alberta as COVID-19 cases surged throughout the past month.

Capital Care Lynnwood is one of 25 long-term care sites that had an outbreak of COVID-19 as of Monday afternoon in the Edmonton zone alone, according to the Alberta government’s website. Lynwood’s outbreak has so far included 56 residents and 29 staff testing positive for COVID-19

Bonnie Roberts, site director at Capital Care Lynnwood, said in a statement on Monday that the outbreak is in two units of the facility while other units are operating as usual. This has meant staffing has been a challenge, Roberts said.

“This means that some services have been impacted, or reduced, on the affected units,” Roberts said.

The Edmonton Chinatown Care Centre is another continuing care facility dealing with a COVID-19 outbreak in Edmonton.

The care home has faced 46 resident cases of COVID-19 and 11 deaths because of the virus. Currently, there 34 active cases among residents.

There have also been 44 staff cases identified, 40 of which are still active.

Sabrina Atwal, a spokesperson for Alberta Health Services, said staffing at the facility is extremely challenged.

“Edmonton Chinatown Care Centre is a standalone site with no other sites to draw staff from, and staffing agencies are also strapped trying to support many organizations, some contracted by AHS and others that are not,” Atwal said in an emailed statement.

“AHS is working closely with the operator to ensure the safety of residents and has some staff supporting care at the site. Basic care needs, including meals, are being met at this time.”

Hinshaw said the province will likely continue to see case numbers and hospitalizations rise over the next several days while waiting to see what, if any, impact restrictions on businesses and social gatherings announced last week will have.

Premier Jason Kenney announced a ban on social gatherings last Tuesday, but restrictions that closed some businesses, cut capacity for others and put a stop to most sport activities didn’t come into effect until Friday.

“Each of us must remain more vigilant than ever,” Hinshaw said.

“I know we are all feeling a lot of different emotions about where we are right now: Anger, guilt, fear, sadness, denial and bargaining are all common themes. Experiencing these emotions is a normal part of grieving all that we have lost to COVID-19,” she said.

“These emotions do not mean that we have lost the battle, just that it is a hard one to fight. The more we can support each other to keep going, while acknowledging the difficulty of these days, the better off we will all be.”

Here’s a regional breakdown of active COVID-19 cases in Alberta:

The most recent deaths reported were: