The IOC started rolling out its ‘Playbooks’ for the Tokyo Olympics

The main purpose of these documents is to convince the public and everyone with a stake in the Games that they can be pulled off during a global pandemic. The “game plans,” as the IOC describes them, are being released a couple of weeks after a British newspaper reported that the Japanese government has quietly resigned itself to the likelihood that the Tokyo Olympics won’t happen. They also follow a poll in Japan that found 80 per cent of respondents think the July 23-Aug. 8 Games should be cancelled or postponed again.

Separate Playbooks will soon be released for athletes, officials, broadcasters and other media, but the rollout began today with the one for “international federations.” This mostly means the world governing bodies that oversee different sports and are responsible for putting together the competitions at the Olympics. World Athletics, for example, organizes all the track and field events you’ll see in Tokyo. But we can assume that many of the guidelines in this document will end up applying to athletes and anyone else going to the Games.

As a public service to you, I read the whole thing. It’s long on colourful graphics and common-sense health and safety measures and short on details. We still don’t know, for example, whether spectators will be allowed. But the IOC says the Playbooks will be living documents, updated as the global COVID-19 situation evolves.

Three things that stood out in the first Playbook:

There’s no mandatory quarantine period before travelling to Japan, or upon arrival. Instead, everyone is being asked to “monitor” their health daily for the two weeks prior to their trip, report the results (including body temperature) in an app, and show proof of a negative COVID-19 test within 72 hours of their flight.

It’s unclear how often people will be tested once they arrive. The Playbook only says that “you will be tested for COVID-19 regularly during the Games depending on the nature of your role.” Also, body temperatures will be checked at the entrances to venues.

Vaccination is not required. Who should get the vaccine and when is a hot-button issue at the moment, and the IOC is cannily staying in the middle of the road. The official line is printed in the Playbook: “The IOC continues to strongly support the priority of vaccinating vulnerable groups, nurses, medical doctors and everyone who is keeping our societies safe. When vaccinations are made available to a broader public, the IOC calls for Olympic and Paralympic teams to be vaccinated.” For now, though, this is only a request. “You will not be required to have received a vaccine in order to participate in the Games,” the document reads. Then comes this disclaimer on the final page: “… you agree to attend the Olympic and Paralympic Games at your own risk.” Read more about the Playbooks and what’s next for the Tokyo Olympics here. 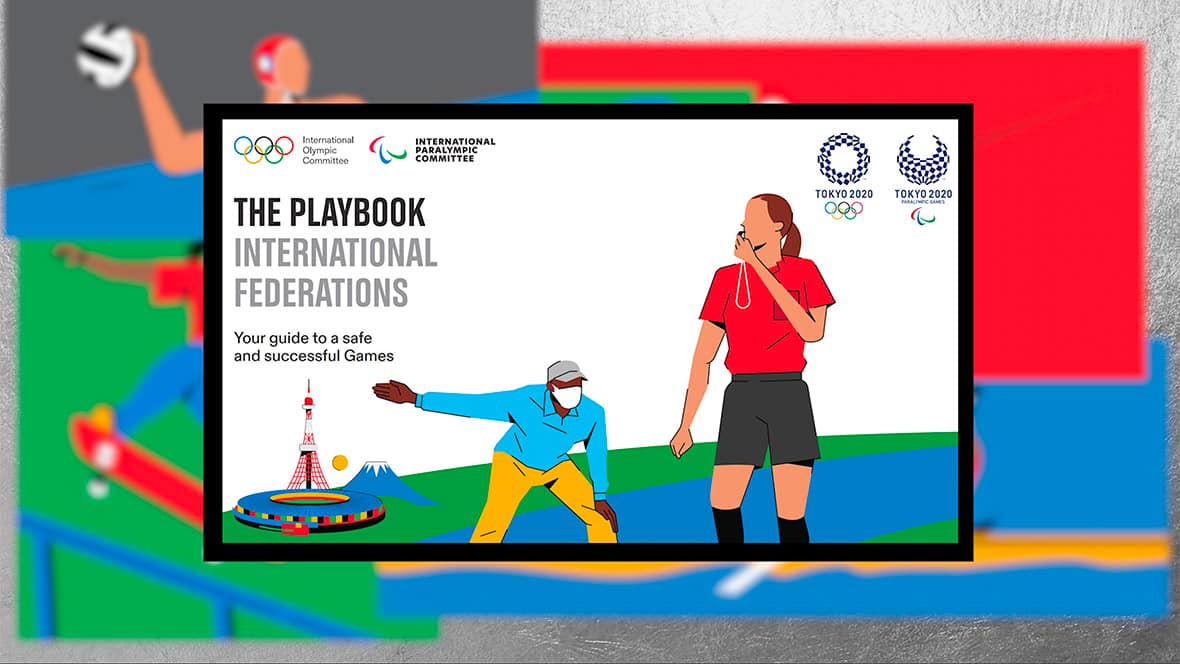 With less than six months to go to the Tokyo Olympics, organizers have said the Games will go on no matter what. Now, they’ve released some preliminary guidelines explaining how that will happen. 1:37

The National Women’s Hockey League “suspended” its season. Even though two of the NWHL’s six teams had already dropped out of the league’s Lake Placid hub due to coronavirus issues, the remaining four were set to play in the Isobel Cup semifinals tomorrow. But the NWHL announced today on Twitter that the league and local officials have agreed “due to new positive COVID-19 tests and the resulting safety concerns for the players, their respective staff & the community that the remainder of the 2021 NWHL Season in Lake Placid have been suspended.” It’s a big blow for the league, which had a deal with the NBC Sports Network to broadcast the semis and Friday’s final live. At our publish time, it was unclear whether an attempt would be made to complete the playoffs at some point. Read the latest here.

St. Louis Blues GM Doug Armstrong is in charge of Canada’s next Olympic men’s hockey team. With the stipulation “if NHL players are able to participate,” Hockey Canada named Armstrong GM of the men’s team for the Beijing Games. Edmonton Oilers GM Ken Holland was appointed the associate GM, and the assistant GMs are Ron Francis (GM of the expansion Seattle Kraken), Don Sweeney (GM of the Boston Bruins) and Roberto Luongo (an advisor to the Florida Panthers’ GM). Luongo, who retired from playing two years ago, will be in charge of “goaltender evaluation.” The NHL skipped the previous Olympics, in 2018, but is expected to participate in 2022 after the league and the players’ association agreed to work toward it as part of their new collective bargaining agreement. A deal with the International Olympic Committee and hockey’s world governing body must still be made. Read more about Canada’s men’s hockey management team here. And read about how Canada’s curlers and hockey players hope to rebound from their disappointing 2018 Olympic results here.

Fred VanVleet scored a Raptors-record 54 points last night. That broke the old mark of 52 set by DeMar DeRozan in an overtime win over Milwaukee three years ago. VanVleet didn’t need OT, just a hot hand that saw him drain 11 of his 14 three-point attempts, 17 of his 23 shots  from the field overall and 9 of 9 free throws in a 123-108 win at Orlando. Besides the Raptors record, VanVleet set a new single-game high for anyone who wasn’t picked in the NBA draft. Previous record holder Moses Malone, who was drafted out of high school by the ABA and joined the NBA when the leagues merged, scored 53 for Houston on Feb. 2, 1982 — exactly 39 years before VanVleet’s big night. Read more about it here.

All of tomorrow’s Australian Open tuneup matches were cancelled. A worker at a hotel in Melbourne where some 600 players and support staff are quarantining tested positive for the coronavirus. So play was suspended for at least a day at the six warmup events currently taking place ahead of the Feb. 8-21 Grand Slam. Everyone is being tested before organizers decide what to do next. Read more about the potential disruption to the Aussie Open here.

A Canadian diver lost her three Olympic medals — and pretty much everything else she owns — in a condo fire. Meaghan Benfeito was home alone last Thursday evening when a barbecue propane tank exploded on the balcony of the unit directly below hers. She got out safely, but not before the third-floor unit she shared with her CFL-player boyfriend Alexandre Dupuis burned to the ground. Among the possessions lost were the three bronze medals Benfeito won in 10-metre diving events at the 2012 and 2016 Olympics. The IOC will eventually replace those, and a GoFundMe page set up by one of Benfeito’s former teammates has already raised more than $31,000 for her and Dupuis. But the couple is still coming to grips with this life-changing event. Read more about the fire and how Benfeito is coping with it in this story by CBC Sports’ Doug Harrison.

Mikael Kingsbury is back. The 2018 Lou Marsh Trophy winner will make his season debut at Thursday’s World Cup moguls competition in Utah. Kingsbury missed the first two events after fracturing two vertebrae while training in November. But the reigning Olympic and world champion is now recovered and ready to add to his record 63 career moguls and dual moguls World Cup wins. Read more about Kingsbury’s comeback here and watch him compete live Thursday at 4 p.m. ET on CBCSports.ca and the CBC Sports app.

Tyler Toffoli is killing the Canucks. It’s bad enough that he leads the NHL with nine goals after Vancouver allowed him to leave for Montreal in free agency last fall. But eight of those have come against the Canucks — including a pair in last night’s 5-3 Habs win. Toffoli is the first player in the NHL’s expansion era to score at least eight goals against a team he played for during the previous season. And he’s done it in only five games, with four Montreal-Vancouver matchups still to come this season.